Fat is an essential nutrient that is vital for survival. Fat as a fuel source contains more than twice the amount of energy per gram than either carbohydrate or protein. When exercising, the body goes through several processes to deliver needed fuel to the exercising muscles. At low to moderate exercise intensity (easy to moderate difficulty), fat is used as the primary fuel source. At higher exercise intensities (hard to very difficult), carbohydrate is the main fuel source. 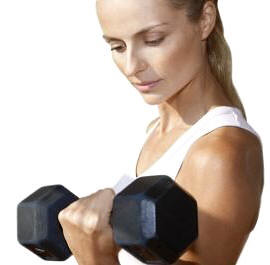 Fat is burned during exercise as fat molecules are taken into the muscles from the blood stream and used as fuel. If more fuel is required, stored fat is released into the bloodstream for the working muscles to use. This fat burning is done during easy activities and lower work intensities. However, at lower exercise intensities, the overall amount of calories used is small compared to higher intensities.

Carbohydrates provide the energy for use at the intial onset of exercise. Once the carbohydrate stored in the muscles is used up, fat then starts to be burned for fuel. Carbohydrate, in the form of glucose, also circulates through the blood and is delivered to exercising muscles. As intensity increases, circulating glucose becomes the predominant fuel source. As the exercise session continues at high levels, most of the carbohydrate is consumed. If the person continues at this high intensity long enough, exhaustion will set in and the person will have to stop.

A calorie is a calorie

Carbohydrate replacement that is done after exercise burns additional fat calories to replenish what was used during exercise. The body treats all calories virtually the same, regardless of the foods they originally came from. If excess carbohydrates are eaten, they will be stored as fat. If intense exercise burns a lot of carbohydrates and, therefore, calories, fat will be used to replace the carbohydrate stores. This fact means that higher-intensity exercise will burn more calories and lead to more fat usage as a fuel, even though very little fat was consumed during the initial exercise session.

Training effects on fat use

Not only is fat used to replace carbohydrate after an intense exercise session, exercise training also has a large impact on the metabolic systems in the body. Training leads to refinements of the chemical processes in metabolism. As a person trains over time, their ability to use fat as a fuel source increases. This training effect leads to more fat use and overall fat loss.